Fly Agaric or false sponge ( Amanita muscaria ), is a species of basidiomycete fungi of the Amanitaceae family . Toxic and psychotropic , it is one of the many representatives of the Amanita genus , and certainly the best known. Native to temperate regions of the northern hemisphere , Amanita muscaria was accidentally introduced to many countries of the southern hemisphere, mainly as a symbiote of cultivated pines, and has become cosmopolitan . They’associates with the roots of different deciduous and coniferous trees.

Poisoning by Amanita muscaria is very rarely fatal. This species is best known for being hallucinogenic . Its main psychoactive constituent is muscimole . The fungus gave its name to muscarine , a poison of the parasympathetic nervous system that it contains in very small quantities, and to a type of cell receptor, muscarinic receptors .

Several varieties have been identified. The muscaria variety is the most common and the most recognizable. It is a large sporophore , with a white stipe and white-bladed hymenium, with a cap covered with a dark red cuticle, dotted with white dots. The other, rarer varieties differ in the color of the top of the hat. These are the orange varieties guessowii , flavivolvata and formosa . 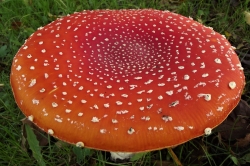 Hemispherical at first when it can sometimes be more orangey than red, then opening flat with a bright red cap covered in white to yellow scales which are the remains of the volvic sack. The scales can be washed off during rain to leave a smooth red cap. 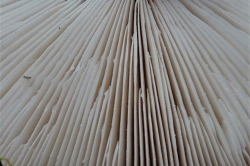 Gills white to cream, fairly crowded and not joined to the stem. 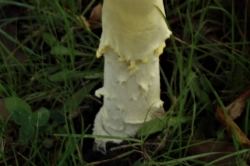 Appearing from a volva (a bulbous sack like structure) the stem is white with shaggy remains of the volva sticking to it, it also has a skirt higher up the stem. 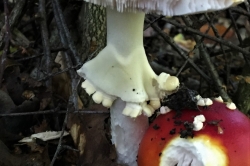 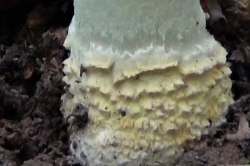 Has a bulbous volva with shaggy rings of scales around it rather than any guttering or sac like structure. 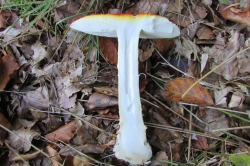 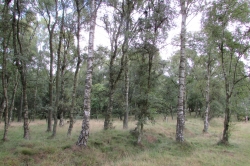 Birch woods in particular but can be found in other mixed woodland. 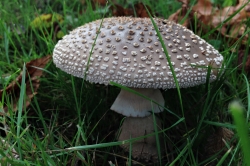 The Blusher, pictured,  – where damaged shows pink red blushing,  has a striated ring and no striations on the margin of cap. While toxic raw it’s edible when cooked.

The Grey Spotted Amanita – close relative of the Blusher, and fairly similar to it, without blushing and usually greyer colours. Although often not considered toxic it is not recommended.

The Panther Cap – very closely related to the Fly Agaric with a darker brown cap. It contains exactly the same toxins as the Fly Agaric, but in more variable and usually higher concentrations.

The Jewelled Amanita – also closely related to the Fly Agaric and Panther Cap, it could pass as a yellowish Fly Agaric (yellow forms of Fly Agaric exist). It might contain the same toxins as the other two but we couldn’t find enough reliable information. Like the Panther Cap some books report it as very poisonous, it is wiser to avoid it. 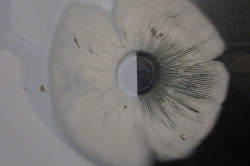 White. Ellipsoid. You should scrape your spores into a small pile to get an accurate spore colour.

The common name of this mushroom comes from the medieval practice of breaking up the caps and leaving them in milk to stupefy fly. This Fly Agaric mushroom also has hallucinogenic properties which the Lapps have used traditionally in ceremonies and even to round up reindeer who seem to love them.

Considered very toxic in most modern field guides, and inclusively in our Wild Food UK guide and video, however in a distant past it was frequently consumed in parts of Europe, Asia and North America after preparation. Scientific studies show that there are methods to efficiently remove the toxins and render it safe for consumption, which explains its use in the past. This is something we weren’t aware of until recently and doesn’t seem to be common knowledge among modern foragers.

Ibotenic acid and muscimole are structurally close to each other, and respectively close to two major neurotransmitters of the central nervous system: glutamate and GABA , whose effects they mimic. Muscimole is a potent agonist of GABA A receptors while ibotenic acid is an agonist of NMDA glutamate receptors and certain metabotropic glutamate receptors (mGluRs) 44which are involved in the control of neuronal activity. It is assumed that it is these interactions which are at the origin of the psychotropic effects encountered during poisoning. Muscimole is responsible for most of it, it is hallucinogenic in doses of 10 to 15  mg 16 , 25 .

Be the first to review “Fly Agaric” Cancel reply 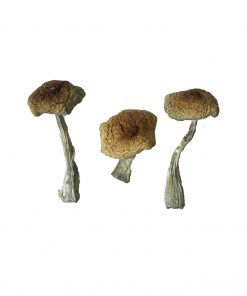