A spore vial is a container made from glass and has a circular rubber membrane on top. The glass vial contains a special fluid which 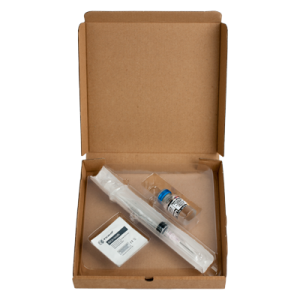 preserves the strain of mushrooms spores.  You can actually see the spores floating around. The spore vial solution has over a 1000 grow parts per milli litter. Due to the fluid used the spores can be preserved for at least two years!

Spores are like the seeds of the mushrooms, but “seed” in not the right word. Spores are not seeds to be exact. In the case of the P. cubensis, P. cyanescens and other Basidiomycota fungi; spores are formed in the reproduction organ (the mushroom) of the fungus without the need of another fungus and can grow independently. However, seeds are only produced when a male and a female have had sexual contact. Fungi do not need males or females and are without gender.

Contents of the spore vial

Magic Mushroom Spore Vials has a number of reasons as to use a spore vial over just carrying and storing syringes.

• Spore vials have a longer shelf life due to being airtight. Most vials’ life expectancy tops around two years while syringes expire around six months.

• Glass vials do not charge with static electricity. Plastic syringes do, so the spores have a tendency to stick to the edges of the syringe.

• Vials are easy to transport and take up less space.

Magic Mushroom Spore Vials are simple and easy to use. Shaking the vial briskly will disperse the spores evenly throughout the container. After the spores have been spread inside the vial, a syringe can be inserted through the rubber membrane. Slowly pulling back the plunger on the syringe, after it is submerged in the spore solution, can gather approximately 1000 spores per millilitre.

Get your substrate bags or grow box that you have prepared earlier. The grow box provides the spores with an environment wherein they can settle and grow into mycelium. After filling the syringe, slowly press down on the plunger. Each drop that falls on the substrate is a potential mycelium growth point, so it is beneficial to spread out the drops as evenly as possible to optimise colonisation.

Alternatively, you can insert the liquid directly into your substrate via a cultivation or injection port, which ultimately has the same effect as dropping spore solution onto the substrate. Make sure your syringe is sanitised, and that you have sterilised the needle specifically, by heating it. Pull back the port protection cap and pierce the port with the syringe needle. Drop the spore solution as evenly as possible into the spawn bag or grow box. Remove the needle and close the protection cap

Magic Mushroom Spore Vials is probably the easiest part of the whole process. Store in a refrigerator at 2-8°C or 35-46°F. The protector stopper needs to be in place when storing the vial, and always clean the top with alcohol before inserting a syringe. Vials can be stored and used for two years after purchase.

There is also no need to dispose of a syringe after one use. Empty syringes can be cleaned and sterilised. Place the needle to a flame until it begins to glow orange. Make sure to let the needle to cool down before it is used again.

Make growing magic mushrooms at home as simple as possible by using spore vials. Extend the shelf life and quality of cultivation yield by carrying glass containers over plastic syringes. Get the best trip possible every time.

STORAGE OF THE SPORE VIAL

Store the psilocybe cubensis spore vial in the refrigerator between 2°C – 8°C or 35°F – 46°F. Leave the ‘septa protecting stopper cap’ in place when storing the vial. After removing this protective cap, always sterilise the septa with an alcohol prep before you insert the syringe.

The psilocybe cubensis spore vials can be stored this way for 2 year after leaving our warehouse.

WHEN DO I USE A SPORE VIAL?

The spore vials are mostly used in mushroom cultivation. With spores you can inoculate substrate. Twe spores will grow out to mycelium and the mycelium will fruit magic mushrooms Therefore it’s smart to do your homework before you start acting as a true mycologist. If you are curious and unexperienced in mushroom cultivation check out the PF-Tek instruction blog. Were have written a manual the world famous PF-Tek method .